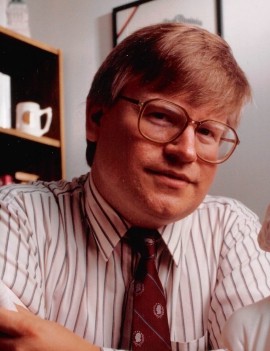 David Nicholas Mayer completed his life at home in the early morning of November 23, 2019, just eight days before his 64th birthday, after a lengthy illness. He grew up in Burton, Michigan, as the only child of Nicholas Joseph and Anna Mayer. Predeceased by his parents and survived by no known relatives, David will nevertheless be sorely missed by many friends, colleagues, and former students.

His academic credentials include M.A. and Ph.D. degrees in history from the University of Virginia plus A.B. and J.D. degrees from the University of Michigan. A scholar, educator, and histor­ian, David was tireless in fulfilling his commitment to mentor his students, deriving great pleasure from their achievements. He joined the faculty of Capital University Law School in 1990 and became Professor Emeritus of Law upon his retirement in 2015. He taught courses in American constitu­tional history, English and American legal history, and intellectual property, as well as a seminar in Libertarianism and the Law.

Prior to moving to Columbus, he taught at the Chicago-Kent College of Law of the Illinois Institute of Technology and, before that, held a postdoctoral fellowship at the Institute for Humane Studies, George Mason University. In 1984–1987, he practiced law with the firm of Pierson Semmes and Finley.

David is a published author of several books. The Constitutional Thought of Thomas Jefferson (Charlottesville: University Press of Virginia, 1994, paperback 1995) continues to be cited as the au­thoritative text on the subject. He also has written several articles that were published in history and political science journals and law reviews. In recent years, he worked diligently and nearly completed his magnum opus, a book on the U.S. Constitution, titled Freedom’s Constitution: A Contextual Interpre­tation of the Constitution of the United States.

A former Salvatori Fellow of the Heritage Foundation, David also has served on the board of directors for the 1851 Center for Constitutional Law in Columbus, Ohio, and on the editorial board of the Cato Supreme Court Review, as well as that of The Journal of Ayn Rand Studies. He was a member of the Federalist Society’s Speakers Bureau and of the board of advisors of The Atlas Society (formerly The Objectivist Center); he was a frequent speaker at its summer seminars and other conferences. He served as faculty advisor to Capital University Law School's Intellectual Property Law Society and its chapter of the Federalist Society for Law and Public Policy Studies, as well as Capital University’s College Libertarians.

In lieu of flowers or donations , please add your remembrances to the web page or share them at the celebration of his life.

To order memorial trees or send flowers to the family in memory of David Mayer, please visit our flower store.