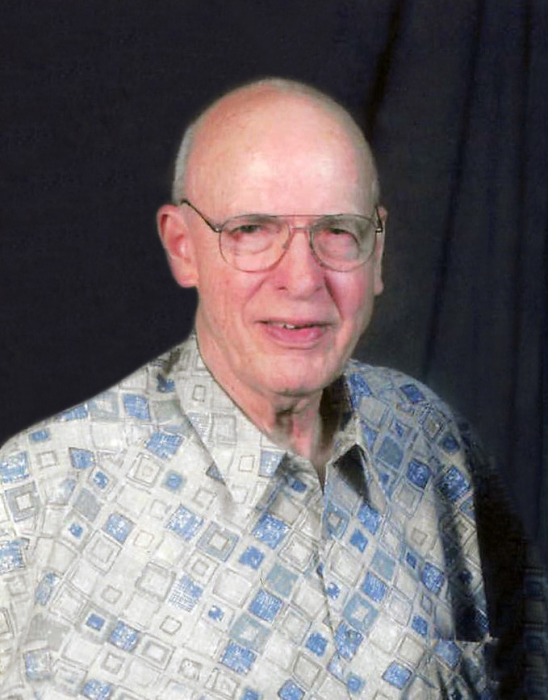 “Bill” was born in Granville, Ohio in 1922 and the family soon moved to Columbus where he grew up on 19th Ave. and Cliffside Dr., attending Indianola Elementary and Junior High Schools.  He graduated North High School in 1940 and attended Ohio State University.  Bill met his wife, Bea, at Indianola Methodist Church and North High School and they married in 1946.

Bill served with the U.S. Army Air Forces from 1942-1945 and the 486th and 487th Heavy Bombardment Groups (B-17 Radar) at bases in Snetterton Heath, Lavenham, and Sudbury, England during the strategic bombing of Germany 1944-45. He remained an avid air force enthusiast and, as a supporter of the Bradford Railroad Museum, loved all things related to steam railroading.

Before WWII, Bill worked with Curtis-Wright Aviation.  After the war and college, Bill was employed with Dresser Industries (Jeffery Mfg., Mining & Engineering) for 40 years retiring in 1986. He was a member of Overbrook Presbyterian Church and University Lodge #631 F & AM and past member of Germania Society, Barefoot Club and Jeffrey Foremen’s Club.  Bill was an OSU Football Redcap 1955-1980.

Special thanks for loving care from Marbue Buoay, and friends at Griswold Home Care.  Bill’s family also appreciates the kindness of Joanne Trabold with Ohio Health Hospice and the staff at Kobacker House.

A memorial service will be held at Shaw-Davis Clintonville Chapel at a later date.  In lieu of flowers, contributions may be made to Ohio Health Hospice and Kobacker House. Interment at Union Cemetery in Columbus.

To order memorial trees or send flowers to the family in memory of William Corbin, please visit our flower store.