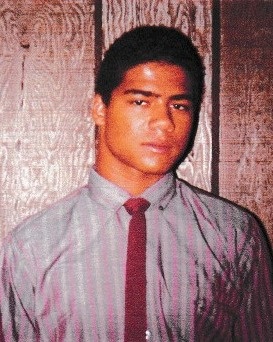 Jamie Pearson (aka Antonio James Alvande) was the most kind, loving and dearest brother a sister could have.  Early on in life he was a sharing and giving person in the family early on.  The things that he did to deserve this honor was always allowing me to work his paper route to make some money, creating a carnival at the house for muscular dystrophy, and inviting kids from across the tracks to church Awana club and basketball in the summer time.

My brother was my protector and I did the same back for him.  In later years, life was hard for him.  Despite all of his troubles, he would never stop doing his best, not holding his head down, and keeping his hope alive.

My brother had many talents that I later learned about and early on.  He was a star basketball player at church, he was very good at scoping any business or area and knowing what to do with his situation.  He was a star at legal matters and paperwork requirements.  He incurred a problem with his credit and not once did he have to come out of his pocket for monies that did not belong to his credit.

I want people to know that Jamie was an honest, hard working protector and brother that loved his family until no end.  The years that we did have together were the most joyous times of my life and I will always cherish this.  We spent many xmas holidays playing board games that brought both of us into negotiation and laughter stages until the early mornings of the night.  We never got tired of doing because we knew that we had a good life with our family.

Prejudice and discrimination kicked in for Jamie and I had a hard time with this.  He stayed in this struggle since the age of 14 and it never stopped making things hard for him.  My hope is that my brother repented and got sent to heaven in order to end this struggle that he had.  When people lie, cheat and steal just to make an individual miserable and defeated, this makes life impossible to bear.  My brother is in a better place not being alive and my hopes are to see and meet him in heaven one day and tell him:  "Jamie, I am home now, and your sister will never leave your side again!"

I luv you brother J and miss you dearly!!!

Susan A Pearson-Reed - twin sister -
To order memorial trees or send flowers to the family in memory of Antonio James Alvande, please visit our flower store.