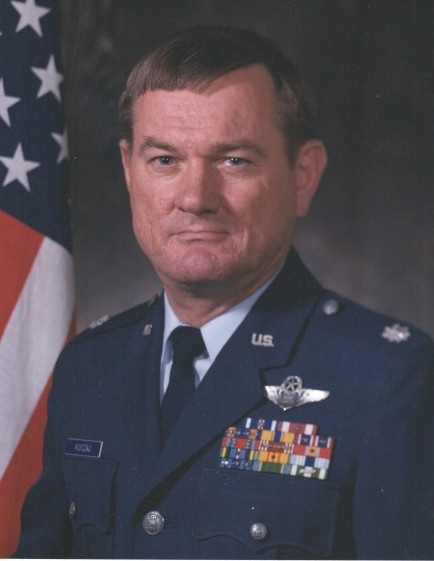 We would like to celebrate the life of Lt. Colonel Charles S. Kuczaj, USAF, 84, of Golden, CO, who passed away peacefully in Delaware, OH, on April 8, 2020.

Charles was born on October 28, 1935 in Union City, Pennsylvania to Stanley and Katherine Rapacz Kuczaj and was the youngest of 12 children.  He graduated from Union City High School in 1953 and subsequently earned an aeronautics degree from Embry-Riddle Aeronautical University.

Charles enlisted in the U.S. Air Force after graduating high school, honorably serving over 35 years on active duty.  Shortly after enlisting, Charles was selected to attend Aviation Cadet Navigator Training and upon his graduation, he was commissioned as a Second Lieutenant.  He went on to complete the elite Air Commando Training and served a tour in the Congo and two tours in Vietnam, where he was awarded the Distinguished Flying Cross. Charles subsequently completed F-111 training and was stationed in RAF Upper Heyford, England, as the Wing Executive Officer and then became Commander of the 7261 Munitions Support Squadron at Memmingen Air Base, Germany. He cherished his friendships with the foreign military personnel and neighbors, and made many life-long acquaintances. Charles returned to the U.S. in 1981 and finished his career at Peterson AFB, Colorado Springs, CO as a Commander in satellite operations.

After his retirement from the Air Force in 1989, Charles moved to Golden, Colorado, and attended the Colorado Peace Officer Training Academy.  He became a Deputy Sheriff for the Jefferson County Sheriff's Office where he faithfully served the county for 13 years.

Charles was proud of his parents' Polish heritage and was a parishioner of the St. Joseph Polish Church of Denver.  He greatly loved his Kuczaj family, gathering for the Kuczaj Family reunions, entertaining family and friends and celebrating with a "Na Zdrowie".

Charles will be greatly missed by his son Charles II, his daughter Kimberley (Jason) Wortkoetter and his grandson Wyatt.  He is preceded in death by his wife Martha, and 11 siblings - six brothers, Valentine, Francis, Joseph, John, Stanley and Richard, and five sisters, Bernice Kuczaj, Mary Lysowski, Stella Kirk, Genevieve Hein and Agnes Fisher.

A Catholic funeral mass will be scheduled by his children in the near future. Arrangements are being made for Charles to be laid to rest at Arlington National Cemetery.

To order memorial trees or send flowers to the family in memory of Charles Kuczaj, please visit our flower store.