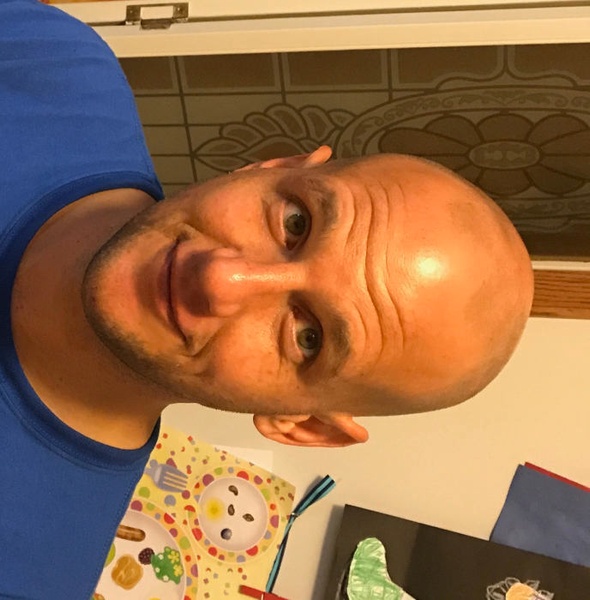 On Wednesday, September 23, 2020, David Scott Blankestyn, the world’s most joyous spirit, a kindred soul to everyone, and a stranger to no one, passed away at the age of 42.  David was a loving husband and proud father to two amazing children.  David was born on June 4, 1978 in Columbus, Ohio to Gerald and Mary (Veltman) Blankestyn.  David grew up in Westerville and Galena, graduating from Big Walnut High School and Bowling Green University.  Other than his time in college and some time in Salt Lake City working with the 2002 Olympics, he lived his entire life in the Columbus area.  David married Anne Baumann on October 3, 2009 and they have been lovingly raising a son, Max, and daughter, Cora.

David was always a talented musician and artist.  He was the drummer/percussionist for Bucktown Kickback, a bluegrass/Americana band that originated in Columbus, recording several albums and touring throughout the Midwest and Southeast.  He studied West African drumming, dabbled on the guitar and ukulele, and recently taught himself to play the piano (to keep up with his daughter!). Music held a special spot in Dave’s heart.  David was known as the upcoming concert event announcer on WCBE for many years in the 2000’s.  Most recently, he worked for WOSU as well as working with a good friend doing carpentry and home repair.

David most enjoyed being a father to Max and Cora, spending as much time with them as he could.  David practiced Tae Kwon Do with his son, earning his red belt, participating on the CK Lee Demo Team, developing strong friendships with other students, and gaining a mentor in Master Lee.

David is survived by his wife Anne, his children Max and Cora, his parents Gerald and Mary, his brother Michael, grandfather Cornelius, several aunts, uncles, cousins, nieces, and nephews, and countless friends.

Join us with celebrating David Blankestyn on Sunday, October 4th from 1pm – 3pm at Whetstone Park (3293 N. High Street by the shelter house, close to the soccer fields/casting pond/playground in the area with green balloons).  Please come to remember and share stories of Dave.  Bring a chair or blanket, or just stop by to say hello.  Please follow all CDC COVID-19 recommendations.

To order memorial trees or send flowers to the family in memory of David Blankestyn, please visit our flower store.