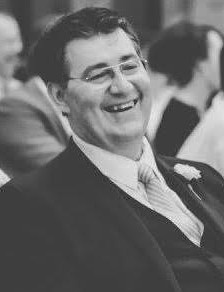 Douglas Stephen Skura, beloved Dad, husband, grandpa, brother, and friend passed away Thursday, March 10, 2022 at the age of 61 years old. He is survived by his wife, Kristian Skura, his sons, Brian (Alexandra), Matthew (Emma), and Christopher, his grandchildren, Emerson and Henry, his brother Brent (Val), as well as sister-in-laws Karen King and Kelli VanLynn, beloved nieces and nephews, and his dear friends and family in Canada. Doug was preceded in death by his parents Bill and Helen Skura, his brother Ronald, as well as his father and mother-in-law Bill and Saundra Slocum.

Doug was born in Coleman, Alberta, Canada, a blue-collar community nestled in the midst of the great Canadian Rocky Mountains. This area was often referred to as “God’s Country” by Doug’s father and appropriately so. The communities namesake Crowsnest Pass, is named after the colossal Crowsnest Mountain that stands above all other peaks in the surrounding area. The Crowsnest River winds through the community, frigid and silent, yet powerful and breathtaking in its raw and untempered beauty. And everyday cool mountain air sweeps down the mountains and brings an almost palatable scent of fresh pine trees each morning, something Doug would often say, he wished he could bottle.

Doug’s father worked in the local coal mines and he wanted his son to pursue a career outside of the Crowsnest Pass and wanted him to pursue University after high school. With higher aspirations in mind Doug decided he wanted to be a physician. In high school he obtained the highest marks and graduated with honors. He attended the University of Alberta where he was enrolled in the pre-medical track and accepted to the University of Alberta Medical School after completing the first two years of his undergraduate. Within six years he obtained both his Bachelor of Medical Science degree as well as his Doctor of Medicine with Distinction in 1984. He was accepted into Orthopedic Surgery Residency at the University of Alberta following the completion of medical school.

Prior to starting his orthopedic surgery residency, he did a transitional internship at St. Thomas Hospital in Akron, Ohio. During this time, his wife, Kristian, was also completing her Bachelor of Nursing Degree at Kent State University. Fate intervened and they met at a Halloween party and were inseparable thereafter. Upon finishing his internship he moved back to Alberta to begin his residency in 1985. A year later he was wed to Kristian Skura in her home-town of Toronto, Ohio. Doug and Kristian lived in Alberta together while he completed his residency. Upon the completion of his residency in 1989 he was accepted to a fellowship in Adult Reconstructive Surgery at Shadyside hospital in Pittsburgh, PA. He remained an active staff member at Shadyside Hospital from 1990-2000 as well as starting his own private practice at Armstrong County Memorial Hospital in Kittanning, PA from 1993-2008. In 2008 he and his family moved from Pittsburgh, PA to Columbus, OH where he practiced at Marysville Memorial Hospital of Union County from 2008 to 2022.

Doug was an accomplished and skilled Orthopedic Surgeon who tended to many patients in both Pittsburgh, PA and Central Ohio. His work as an Orthopedic Surgeon was his true life’s calling and he found great purpose in taking care of others. His unwavering dedication to his patient’s made for many late nights and early mornings, but there was nothing he would have taken back to ensure the best and optimal outcomes for each and every one of his patients.

Doug’s absolute greatest pride and joy in life was his three boys, and watching them pursue their dreams. He saw the importance of a work-life balance and he was the man that could make anything happen. He was the coach for their little league baseball and hockey teams, the loudest and proudest fan in the seats during basketball and football games, and was the ultimate superfan of their accomplishments. He was not shy to tell everyone how proud he was of his three boys.

The take your kids to work day worked on his son Brian because he is following in his footsteps becoming an Orthopedic Surgeon. The time spent passing on his medical wisdom and during Brian’s rotation with him formed invaluable memories and life-lessons that he will continue to use and implement when he is treating his future patients. Watching and attending Matthew’s football games in highschool, at Duke University and eventually National Football League made him extremely proud and looked forward to each game. There was never a week he did not go without his personalized jersey and team gear to talk about amongst his friends and co-workers. He loved attending Christopher’s football games at Ohio Dominican University and watching his son graduate with a degree in business gave him immeasurable pride.

The loss of Doug will be felt for years to come throughout the family and surrounding community, but the love he had for his wife and three boys, the life lessons he instilled, and the impact he had on everyone he met will be carried out as his legacy.

The family will be having a private funeral ceremony. They will be holding a celebration of life with close family and friends at a later date.

Our family wishes for no family to feel the immense pain we feel in mourning our tragic loss. Please know that there are resources for help: https://afsp.org/suicide-prevention-resources

To order memorial trees or send flowers to the family in memory of Douglas Skura, please visit our flower store.