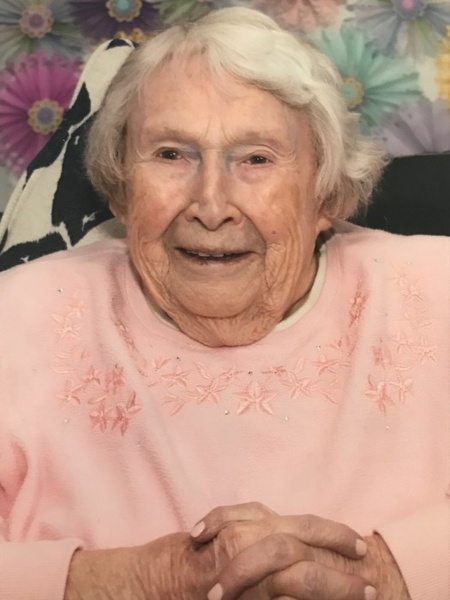 Elizabeth S. Jackson, 101, of the Clintonville neighborhood of Columbus, died peacefully in her home on October 11, 2021, with family around her. She was born on March 16, 1920, the daughter of Paul and Marion (Newlon) Smith in Beaver Falls, Pennsylvania. She attended high school in Mayfield Heights, Ohio and received her bachelor’s degree in social work from Ohio State University in 1942.

When the United States entered World War II, Elizabeth (Libby) joined the Marine Corps at the time her brothers, Paul and William, joined the US Army and Air Force respectively. Libby served at Cherry Point and Camp Lejeune, North Carolina and El Toro, California, where she was stationed when the war ended having achieved the rank of sergeant. She returned to Ohio to begin her social work career and soon met her husband, William Jackson. They married in 1948 and began a family, moving to Chardon, Ohio in 1951 where they lived and were members of St. Mary’s Parish for forty years. They raised their eight children there. Those years were full of diapers, scraped knees, tea parties for her little girls, camping trips, 4-H and boy scout troups, canning vegetables, keeping house, holidays, birthdays and weddings. Libby was an avid reader and read to educate and entertain her children and to escape from her children. She was invariably interested in all of her children's pursuits and in all the events taking place in the world.

As her children began to disperse, Libby obtained her driver’s license at age 60 and delivered books for the local library. Later, when both her husband and mother’s health began to fail, Libby moved them all to Columbus, where a critical mass of her children lived. She adopted the Clintonville neighborhood as her home and spent many happy years there, joining the Immaculate Conception Parish, participating in water exercise classes regularly, traveling often both in and out of the country, and being close to many of her children, grandchildren and eventually great grandchildren.

Libby loved crossword puzzles, jigsaw puzzles and Jeopardy. She kept current on world and national events and watched news shows (particularly Rachel Maddow) regularly. She loved history, biographies, traveling, Italy, the Park of Roses, picnics by the Sciota River, crafts on Mondays, and watching the birds at her feeders. Sunday was her favorite day because she had lots of visitors. Most of all, she loved her large family. She is survived by her children: Jane Jackson, William Jackson and his wife Louise, Geoffrey Jackson and his wife Sheila, Sarah (Sal) Jackson, Molly Bachman and her husband Thomas, Nan Burns and her husband William, Catherine (Kit) Janitzki and her husband Steven, and Paul Mathew Jackson; her grandchildren: Brian, Steven, Mathew, Ian, Emily, Tim, Hannah, Kea, Cory, Thomas, Jennifer, Sarah and Lauren; and her great grandchildren, Ben, Emma, Mable, Corbin, Wyatt, Keelyn, Myles, Walker, Lachlan, Rosalie, Cosima, Elijah, Cecilia, Theodore, Thomas, Jackson, Finn and Laken. Although she outlived her contemporaries, she retained her zest for life and interest in all the activity around her.

Libby had great faith which helped her in her life’s journey, including her final days. She is loved and will be greatly missed by her family. Family will receive friends Monday, Oct. 18 from 3-5 pm at SHAW-DAVIS FUNERAL HOME 4341 N. High St. Cols. 43214. A funeral Mass will be celebrated at 10 am Tuesday, October 19 at Immaculate Conception Catholic Church, 414 E. North Broadway Cols. 43214 followed by a burial service at All Souls Cemetery Chardon, Ohio. Rest in Peace Mom, Grandma, GG.

To order memorial trees or send flowers to the family in memory of Elizabeth Jackson, please visit our flower store.