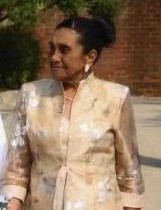 Gloria Rita Jones, age 89, was a God-fearing woman who passed away peacefully on October 2, 2020 at Grant Memorial Hospital in Columbus, Ohio. Gloria was born on December 5, 1930 in Georgetown, Guyana to parents Claude Stairs and Alma Henderson. She moved to America in 1995.  After spending some time in Maryland she moved to Ohio and later on moved to an independent living facility in Columbus, Ohio.

Gloria spent time doing what she did best, taking care of children at the YMCA and later in her daughter’s Day Care Center. Gloria was someone who loved travel and was always ready for a road trip.

Gloria was well loved by all her family and loved all. Gloria was healthy throughout her life and did not die of any disease and/or sickness but, died at her given time surrounded by loved ones. She said her goodbyes sitting up strong and saying “I love you.” Gloria left the world peacefully after blessing others with her light. Her funeral service will take place on October 6, 2020, 11:00 am at Union Cemetery where her remains will be buried under her tree according to her wishes.

Special thanks to all the healthcare workers who provided exceptional care with special mention: From Mount Caramel East Orthopedic: Gizew, William "Will" From Grant Memorial: The Emergency room admitting team on staff September 30 that fought for her at intake. ICU Care team: Eny and Alex.  9th floor night shift nurses: Abdi and Stephen and day shift nurse Shelly.

To order memorial trees or send flowers to the family in memory of Gloria Jones, please visit our flower store.
Open