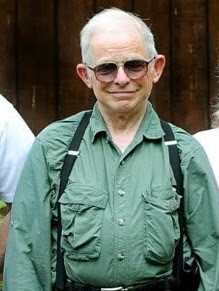 Guy was born on October 31, 1945, in Bishop's Stortford, Hertfordshire, England, and moved to the United States with his family in 1954. Upon becoming a U.S. citizen, he proudly served his country as a Seaman in the U.S. Coast Guard during the Vietnam War. After his service, Guy completed a Bachelor's in Geography from Kent State University. It was while pursuing this degree - after having sustained life-altering injuries and impairment to his vision during his time in the Coast Guard - that Guy discovered his lifelong passion for cycling.

He was enthusiastic about sharing his love of bicycles, and participated in many races, group rides such as the Tour of the Scioto River Valley (TOSRV), and cycling clubs such as American Youth Hostels (AYH) through the years. He passed along this love of cycling to his children and grandchildren.

Guy was also passionate about disabled veterans' rights, and was a proud member of the Disabled American Veterans (DAV) organization.

Through the years, his strong work ethic and dedication to his family took his career on many different paths. A career highlight for him in his later years was working with children as a substitute teacher in Westerville City Schools. His love of his grandkids was beyond measure, and many fond memories were made with his kids and grandkids while biking, fishing, camping, or hiking outdoors around Ohio and beyond.

A standout moment of his life was in 1985, when he returned to England with his wife and daughter, to visit friends and family and to tour the country on bicycle. It was there that he purchased the three-seater bicycle nicknamed "The Triplet," which became a family fixture through the years, raising eyebrows and bringing out smiles from passersby everywhere his young family would ride.

Guy is survived by his son, Jeff (Jessica) Nesham, daughter, Felicity (Paul) Nesham-West; grandchildren Milo, Luca, Jackson, Jameson, and Josselyn; sister Sarah King (Emory), and brother, Tim Nesham (Molly). He was preceded in death by his parents Louis and Patricia Nesham, and by his brothers, Mark Nesham, and twins Andrew and Adrian Nesham.

A private memorial service will be held at a later date.

Because of the circumstances that contributed to Guy's death, it is his family's wish that everyone get vaccinated to prevent further death, illness, and heartbreak from COVID-19. They also wish to express their sincere thanks to the nurses who made Guy's final moments as comfortable as possible for him. Donations in Guy's memory can be made to Operation Second Chance at http://operationsecondchance.org .

To order memorial trees or send flowers to the family in memory of Guy Nesham, please visit our flower store.