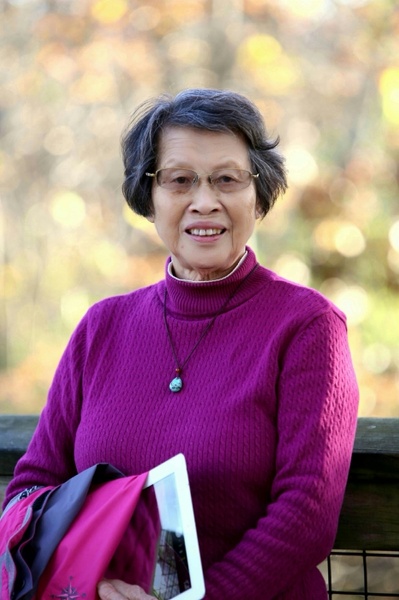 Mom was born in a scholarly family on February 27, 1936, in Xiangtan, Hunan Province, China, to father Junzhang Zhou, and mother Bihe Yan. Growing up in wartime, she often had to flee with her parents for shelter, living in a hard and turbulent condition. Though she was still able to complete her primary education intermittently. She spent her middle school years in Hunan Yueyang Middle School and the prestigious Zhounan Girls' Middle School and earned excellent grades. In 1954, mom was accepted by the Department of Electrical Engineering of Tsinghua University after successfully passing the college entrance exam.

Mom had a wide range of interests since childhood. When she was studying at Tsinghua University, she participated in the school choir and the Tsinghua Women's Volleyball Team. Her university life was intense, rich, and fulfilling. Upon graduating from Tsinghua University, mom actively responded to the call of the state to build a brighter future for the country. In 1959, she and our dad gave up the opportunity to stay in Beijing, instead, went to the Electric Power Design Institute in Inner Mongolia. Mom had dedicated the next twenty years, the best time of her life to the power industry in Inner Mongolia.

In 1982, our dad died suddenly in a traffic accident. This catastrophic event became mom's lifelong pain that was never healed. The following year, mom requested a transfer out of Inner Mongolia. After working around several obstacles, she was finally transferred to the then Beijing North China Electric Power Design Institute and worked there until her retirement in 1996.

During the time she had worked in North China Electric Power Design Institute, mom was a hardworking spirit, conscientious and dedicated. She had studied and kept up with the latest technology and became the backbone of the business. In 1990, 1994 and 1995, she had gone to Moscow on behalf of the company to negotiate cooperation between the two countries. Each time, she had achieved the goals using her professional knowledge and negotiation skills. These three trips to Moscow are the best memories of her life. Apart from the negotiation, she and her colleagues had the opportunity to enjoy the beautiful scenery of Moscow. They visited the Red Square, Lenin’s Mausoleum, Moscow University, the Kremlin Theatre, and other famous attractions. They also enjoyed the opera, the art gallery, and the Neva River. All of this is undoubtedly a cultural feast for her who grew up reading Russian novels and singing Soviet songs, which greatly satisfied her admiration for the Russian culture. With beautiful and emotional penmanship, she detailed this wonderful experience in the article "Once upon a dream, once upon a song".

In the spring of 1993, representing her company, mom came to the United States for the first time as a technical consultant and negotiated with General Electric. Later, accompanied by her younger daughter, she toured Philadelphia, Washington DC and New York.

After retirement in 1996, mom had the opportunity to enjoy more of her personal hobbies. In addition to traveling in China and abroad, she had also participated in the Beijing Old Classmates Choir. She practiced with her friends every weekend and enjoyed every bit of great fun from it. In addition, she had also participated in many sports, morning exercises with neighbors and friends, and often won everyone's admiration with her graceful dance. Mom’s retired life was full of adventures and excitement.


In 2012, mom permanently moved to the United States and started a new life. The nearly 80-year-old still had the same enthusiasm for learning. As soon as she arrived, she immediately took advantage of various opportunities to learn English, and it was very effective. Within a few years, she could communicate with locals in simple English. At the same time, she had participated in the local choir, made friends, and actively engaged in various performances and cultural activities in the local community.

Mom had experienced ups and downs throughout her life. She had several chronic medical conditions that often made her frail and ill. Though she was a hard-working spirit and independent. Whether when she was in Inner Mongolia or Beijing, she had not only designed many blueprints for her work but also spent countless days on construction sites in Inner Mongolia, putting the blueprint into real constructions. Achieving her teenage ideals in her career and dedicated her talent to building infrastructures in the country’s rural areas.

Mom had a wide range of interests. She loved sports, music, travel, writing, and making friends. She used every opportunity to actively expand her life goals, try new things, and maintain a strong curiosity and lasting attention to the world. To the family and friends around, mom was always meticulous and considerate. She gave love and care with all her heart in all aspects of life and work and won the respect and love of her family and friends.

We’d like to thank Kobacker House hospice care center for their wonderful care during mom’s final days. She passed away peacefully, with dignity with her family sounded her with love.

May there be no pain in heaven! May mom rest in peace!

In lieu of flowers, please consider a donation to Pelotonia at http://pelotonia.org/yfan to support cancer research at OSU and Yiwei's 2021 Pelotonia ride. We also take cash contributions and will donate to Pelotonia later.

To order memorial trees or send flowers to the family in memory of Jingjuan Zhou, please visit our flower store.