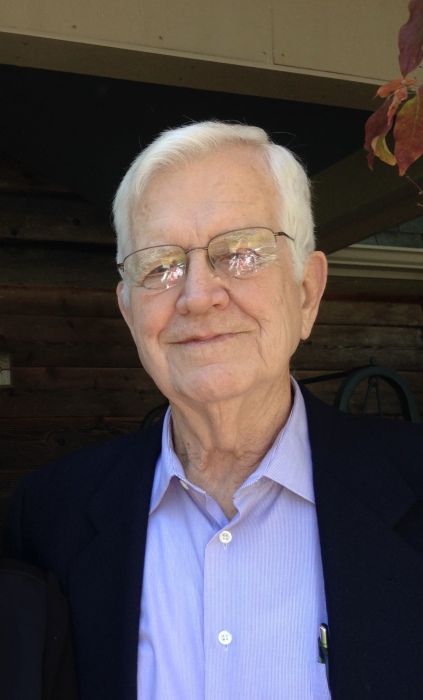 When John Leonard Phillips was ten years old, the United States military base at Pearl Harbor was attacked. So he hustled out to the corner of Arcadia and High streets and sold special edition newspapers to passersby.

It was one of his most vivid and enduring memories. He liked the idea of soothing people’s fears by bringing them information, of being calm and steady in the face of turbulence and uncertainty. Later he would do the same for his children as they were growing up and for his friends when they were in need: He was the reassuring voice, the hand on the shoulder.

He was, to put it simply, a good neighbor. And everyone was his neighbor. John, who passed July 16, was born May 28, 1931, in Columbus to the late Catherine Mozelle Whipps Phillips and Thomas David Phillips. Orphaned in his early teens, he was sent to live on the farm of a family friend in Grove City. After high school graduation he joined the U.S. Air Force and served as a radio mechanic in Guam. Upon his return, he graduated from Ohio State University and then met and swiftly married Elaine Haigh. They settled in the Westerville area, rearing five children in a rambling house that was always filled with laughter and the tangled shouts from various ball games played on the long front lawn until darkness fell. He held a dazzling variety of jobs throughout his life, from salesman to installer of window treatments to apartment manager to cattle auctioneer. It was auctioneering that most captivated him, enabling him to travel across the country to farms and ranches. On one trip, he met Eleanor Roosevelt at the farm owned by her son, Franklin Roosevelt Jr.

Elaine, who died in 2017, was the center of his life, his partner and his lodestar.

We are defined by what we love and John’s loves leap readily to mind: Elaine; his children; his country. Less exalted loves belong on that roster as well: Ohio State football; chocolate ice cream; “The Auctioneer” by Leroy Van Dyke and “You’re A Grand Old Flag”; any joke, the cornier the better.

It is commonplace to describe a departed loved one as unique and irreplaceable, but in the case of John Phillips, it is surely true. He was a decent and honorable man in a world that rarely rewards decency and honor with riches and fame. Instead, it rewards them with the love of their family and the admiration of their friends. John had both of those things in abundance. He brought laughter and ease to the lives he touched, and he delighted in doing so.

His favorite line was, “It’s a good day for the race!” When you asked, “What race?” he would reply, “The human race!” Losing him makes the world a little dimmer, a little less bright and fine.

Yet he lives on through those who survive him: His children -- Thomas Haigh Phillips (Diane Dornbusch) of Worthington, John E. Phillips (Brenda) of Phoenix, AZ, Susan Phillips of Galena, Caroline Elaine Phillips-Stevens of Sunbury and Elizabeth King (Neil) of Annapolis, MD-- and his eleven grandchildren, five great-grandchildren, and many nieces and nephews and friends.

John made the world better for having lived in it. Thus he will be mourned as fiercely as he was cherished, and missed forever. The ache in the hearts of those who loved him will one day be superseded by a smile -- which is what he most assuredly would want -- but not for a while.

The family will gather and invites friends to join them to celebrate John’s life on August 21, 2021 at 1:30 PM at Rocky Fork Metro Park MillStone Picnic Shelter. 7180 Walnut St., Westerville, OH 43081.

To remember John and his extraordinary life, his family asks that you consider making donations to his daughter Caroline’s Pelotonia Ride, https://pelotonia.org/profile/CP0018 , or Hospice of Central Ohio at https://www.hospiceofcentralohio.org/donate/donate-now/ .

To order memorial trees or send flowers to the family in memory of John Phillips, please visit our flower store.