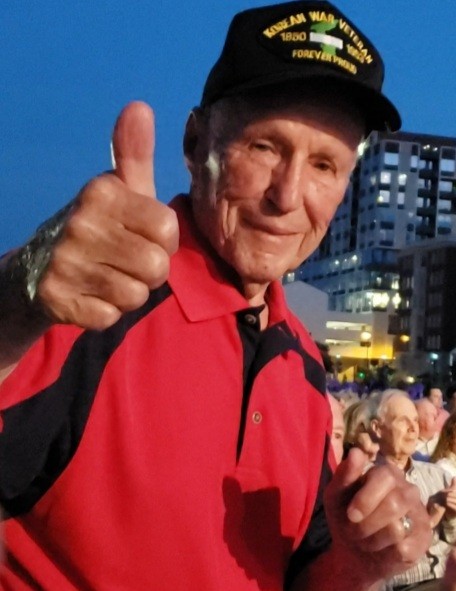 Ken Carpenter, 90, passed away peacefully on December 1, 2021 surrounded by his wife, Sharon of 51 years, daughter, Kendra, and her husband, John Dean. Ken was born on April 1, 1931 in Cannel City, Kentucky to Winfred and Helen (Davis) Carpenter. During WWII, the Carpenters moved to Fairborn, Ohio where Ken graduated from Bath High School (now Fairborn) in 1948.

To say Ken was a competitive sports star is an understatement. Ken excelled at everything he did – from amateur waterskiing, billiards, bowling, and golfing to collegiate athletics in basketball, track, and football. There was never a local newspaper printed that did not tell of his accomplishments. He went on to play college football at Miami University, and later transferred to Cedarville College where he continued his football career, along with basketball and track. Ken graduated in 1952 with a B.S. in Education.

After college, Ken served two years in the Korean War. Ken was a strong patriot and loved America and the principles upon which she was founded. Never did he take a knee when the Anthem played; he stood proud with his hand over his heart.

Ken began his 33-year teaching career at Centerville, High School, where he was an assistant football coach.  The following year, he transferred to Northridge High School where he stayed for the next 32 years. Ken served many roles: he taught history, was a school guidance counselor, was a truant officer, taught driver’s education, and played

an essential role in starting the Occupational Work Education program that focused on keeping high-risk students from dropping out of school.

But closer to his heart, he was a champion coach, and a beloved one at that. Ken coached football, was the head basketball coach, and brought the track team back from extinction to a championship team.

Ken had a way of connecting with kids and motivating them to be their best. And, he had an eye for young talent and developing that talent. After retiring, he continued attending high school sporting events and watching collegiate sports. Also, former students often stopped him in public to say thank you and share a memory of how he made a difference in their lives. In 2017, Ken was inducted into the Northridge High School Hall of Fame.

Ken will be remembered by many people for many things: his love of family and Country, his stubbornness, his steadfast integrity and loyalty, his love of cars and knack for bargaining, his “pool-sharking”, and enjoying “down home cooking” with a cold beer.

Condolences may be sent via Shaw-Davis funeral home at  www.shaw-davis.com. Memorial donations may be made to K9s for Warriors (https://k9sforwarriors.org) or Honor Flight (https://www.honorflight.org/).

To order memorial trees or send flowers to the family in memory of Kenneth Carpenter, please visit our flower store.