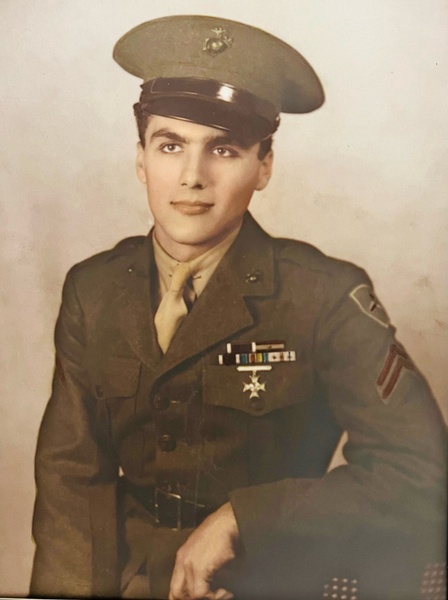 Mr. Masci was born in Canton, Ohio, and lived and worked the majority of his life down the road in Wintersville. At the age of 18, he bravely and voluntarily enlisted in the Marine Corps to join the fight for freedom in the Pacific during WWII. As a “Mud Marine”, he stormed the beaches of Bougainville, Guam, and Iwo Jima with additional action on Guadalcanal. He was at the base of Mount Suribachi during the iconic flag raising on Iwo Jima, and spoke fondly of the cheers of his buddies and sirens from the ships offshore. During actions in Bougainville, he saved two Marines from drowning. His bravery on Guam was recognized by a commendation from his Commanding Officer. The heroism of the Marines on Guam is remembered to this day every July by a grateful citizenry for their liberation. Through the battles of the campaign, it was common to see inexperienced replacement marines and veterans alike at Masci’s side, trusting his grit and leadership to get them through the day. He finished the war with the Asiatic Campaign medal with four Bronze Stars, a Purple Heart for wounds on Iwo Jima, the WWII Victory Medal, Combat Action Ribbon, Presidential Unit Citation with one Bronze Star, Navy Unit Commendation, Rifle Marksman Badge, and Letter of Commendation.

While on leave from the Pacific, he courted and married his sweetheart, Gertrude. After only a few days of marriage, he returned to war to fight alongside his buddies; back to the fight for liberation and freedom.

During a gas explosion in a nearby plant, his bravery was called upon once again, and he grabbed all the equipment he could carry; running to the source of flame and chaos. When he arrived on scene to a number of dead and injured, he noticed a gas leak and that a secondary explosion could happen at any time. Without regard to his own safety, he pushed into the area of danger to pull out the injured and deceased.

Mr. Masci’s life was about valor, protecting those in need, and doing what was right with his signature humility. He raised a family with grit, and instilled those ideals that came so naturally to him. He is truly a special breed of human being, and a hero to his family.

Mr. Masci is survived by his beloved wife, Gertrude (They would have been married for 77 years as of this coming July 28, which is also the day of Gertrude’s 96th birthday); his son Leonard Masci Jr. and his 3 children, 1 daughter in-law, and 2 grandchildren; his son Terry Masci and his wife Robin and their 6 children, 2 sons-in law, and 14 grandchildren; and his daughter Barbera Masci Finnin and her husband Mark, their 5 children, 1 son-in-law, 1 daughter-in-law, and 4 grandchildren. A 4th child, Carol (daughter), is deceased.

His family will announce the details of a celebration of life and a military salute, for all those who wish to join them in honoring their Hero. In lieu of flowers, donations towards the future healthcare needs of Mr. Masci’s beloved wife, Gertrude (Gerty), should anyone want to contribute, can be made out to “The Gerty Fund” and sent to 5658 S. Ensenada Court, Aurora, CO 80015