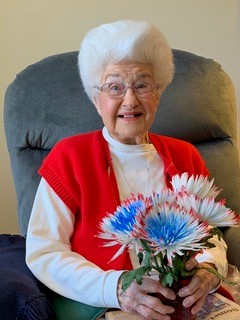 Naomi Ruth MacDonald left this world peacefully on November 23, 2020 at the incredible age of 100! She lived long enough that she was preceded in death by most everyone she grew up with– most notably her parents, William and Netti Hughes, sister Velma (Bob) Fear, her husband John, daughter-in-law Ginny, and many friends. She is survived by her children, Karen (Duane) Werth, William MacDonald, David (Ann) MacDonald, six grandchildren– John, Andrew, Tyler, Ian, Sarah and Kiersten, as well as many good friends and neighbors, all of whom she loved dearly and will miss her terribly.

Naomi spent many of her years as a caring wife, mother and homemaker. After her husband passed, she worked at Euclid General Hospital where she had been a long time volunteer and made many more great friends whom she continued to stay in touch over the years. She retired to help take care of her parents and daughter-in-law when they needed her. She considered herself very blessed to discover good friends she enjoyed traveling with and was able to take trips to England and Scotland, in addition to seeing the sights in Hawaii, Alaska and the Canadian Rockies. She had great faith and was an active member of the East Shore Methodist Church in Euclid for most of her adult life, even after she had moved to Columbus.

Naomi never thought of herself as extroverted, but she made friends wherever she went– mostly because she made people feel like they mattered and that she was truly interested in them. People loved popping in for a visit and a cup or strong coffee! Over the course of such a long life, it was inevitable that she would experience challenges, but she always met them head on and adapted as circumstances required. That and her great faith in a God who was always looking out for her and her loved ones, is one of the greatest legacies she left to those who knew her. She will be greatly missed but will live on in the hearts and memories of those you knew her.

The family would like to offer heartfelt thanks to those who helped care for Naomi over her past few years in Columbus, specifically those from Right at Home, Stone Oak, Kindred Hospice and Steven Luzier. Due to pandemic circumstances, any memorial service will be delayed until such time as we can safely celebrate her and reunite her with her husband in Cleveland. In the meantime, anyone wishing to celebrate Naomi’s life are asked to make a donation in her name to the charity of their own choosing. Despite modest means, Naomi always found a way to give to causes that meant a lot to her, to include anything having to do with animals, the environment, or cancer care.

To order memorial trees or send flowers to the family in memory of Naomi MacDonald, please visit our flower store.