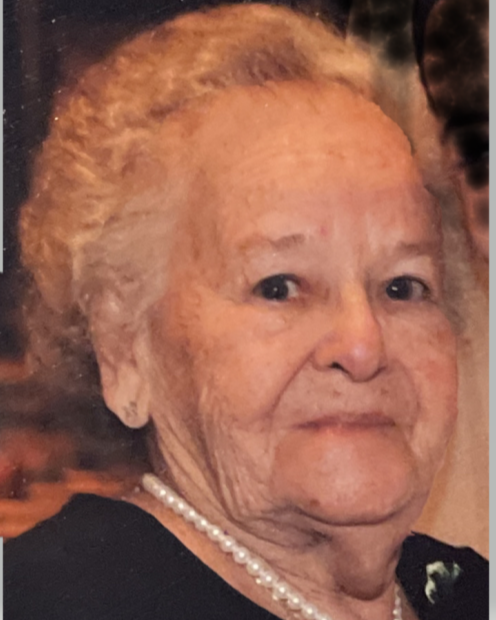 Naomi (Padovan) Moreno, age 100, passed away peacefully on October 11, 2022, at home, surrounded by family. She was preceded in death by her parents, Italian immigrants Angelo and Maria Padovan, her husband of 50 years Joseph Moreno, her daughter Judy Jones Pope, son-in-law Stacy Culter, brothers and sisters-in-law Bruno and June Padovan, and Renzo and Jean Padovan.

Mom is survived by her daughter and caretaker for the past five years Mary Moreno Culter, and loving sons Joe (Kathy) Moreno and Dick (Sue) Moreno.

She was revered and adored by her grandchildren Kelly (Todd) Hatzo, Jason (Missy) Jones, and Morgan Jones (who she and her husband Joe raised after the sudden death of their mother), Julie (Matt) Barber, Joe Moreno Jr, Tony Moreno, Amy (Paul) Haggard, Lauren Culter Liu (Tony), Jennifer (Pete) Dolan, Michael (Alicia) Moreno, Matthew Moreno, as well as twenty great-grandchildren and numerous nieces and nephews. There was nothing more important to her than family. She worked outside the home while her children were young so that they could attend Catholic schools, something that she missed growing up poor during the Great Depression.

Mom enjoyed a very productive and active life, even into her nineties. Her catchphrase was “Use it or lose it”, which she applied daily. She was a great seamstress, crocheted, and did ceramics. She was a proud Italian and an extraordinary cook who always had an extra plate at the table for the family's Sunday dinner.

She was a devout Catholic and a founding member of St. Matthias Church, so it is fitting that her funeral Mass will be held there some sixty years later. On Saturday, October 22, t.he family will receive friends from10:00 to 11:30 at the church before Mass. A private burial will be held at a later date. After Mass, please join us for a celebration of her life at her son Joe’s home.

In lieu of flowers, contributions can be made in her name to St. Matthias Church, the Mid- Ohio Food Bank, or Capital City Hospice.

To order memorial trees or send flowers to the family in memory of Naomi Moreno, please visit our flower store.