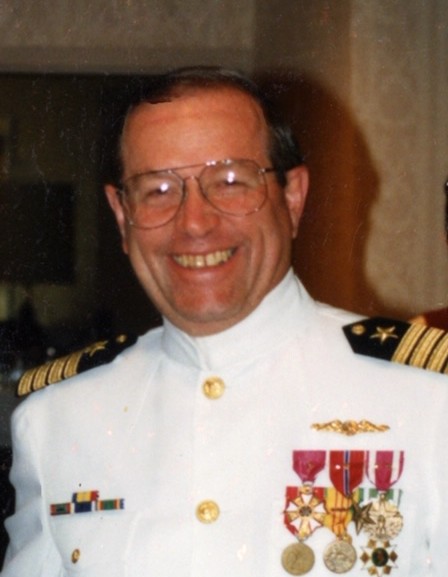 Born on October 30, 1939 in Syracuse, New York to a career Immigration and Naturalization officer, he grew up in both upstate New York and Canada.  Graduating from high school in Canada and New York, Norm attended the State University of New York on Long Island for one year before being accepted to the United States Naval Academy.  Graduating with the great class of 1963, Norm was commissioned an Ensign in the United States Navy and started a career as a Surface Warfare Officer.

As a young ENS, he got underway from Naval Station Norfolk and pulled into port in Newport, Rhode Island.  Although he was only there briefly, it was long enough for him to sweep a cute brunette named Judy off her feet, or perhaps – she swept him off his.  Either way, on September 18th, 1965 they began to build a life together as husband and wife.  Norm built an impressive career along the way, serving with the brown water Navy in Vietnam, followed by a tour to Naval Postgraduate School in Monterey, California where he and Judy welcomed their first born, their daughter Holly.  Within 35 seconds of her birth, she had Norm wrapped around her little finger.  After getting a Master’s degree, he was allowed to stay in Monterey to complete his PhD and they welcomed their second born, a rambunctious little boy named Cory.

Before they left Monterey, Norm transitioned from Surface Warfare Officer to Engineering Duty Officer, and was qualified in Submarines.  Indicative of the remainder of his life, it was a decision he made because he refused to put his family second to anything or anyone.  As a family, they moved to Norfolk, Virginia, Portsmouth, New Hampshire and Annapolis, Maryland.  Getting stuck in the staff world at the Pentagon and Naval Sea Systems Command, Norm raised his family with love in Annapolis for more than a decade.

One of Norm’s final tours, and one that he enjoyed the most was as the Supervisor of Shipbuilding, Conversion and Repair in Groton, Connecticut.  After retirement from the Navy, Norm was able to capitalize on his incredible reputation in the Navy and built follow on careers at Digital Systems Research, EG&G, and finally Lockheed Martin.  With his children grown and building their own families, Lockheed Martin offered Norm and Judy incredible opportunities.  Norm and Judy moved to England for four years, as Lockheed had a contract to build the next generation carrier at Thales Shipbuilding.  Upon return from England, they barely were able to move back into their house in Manassas, Virginia when an opportunity to be involved with the Littoral Combat Ship was presented, and they moved to Marinette, Wisconsin.

After retiring from Lockheed they moved back to Annapolis, Maryland. Annapolis wouldn’t be their final destination however, Norm moved with Judy one more time.  The final move was to Westerville, Ohio.  The reason for this move was for the same reason Norm made all his decisions, family.  He wanted to watch his three grandchildren grow into adults themselves.  When asked, he would respond that his children and grandchildren were his greatest accomplishment in life.  His love for Judy knew no bounds.  He taught everyone he ever met through his words and actions about service, selflessness, fairness, compassion, life and love.

He leaves behind his beloved wife of 54 years Judy of Westerville, OH, two brothers – Robert and wife Rebecca of Lincoln City, OR, William and wife Deborah of Hudson, NY and a sister Mary Hickey and husband David of Walnut Creek, CA.  Additionally, he leaves behind a daughter Holly Shackelton Mackey and son-in-law Paul Fairless Mackey, both VA Nurses in Columbus, OH, a son Major Cory Matthew Shackelton, USMC (ret) and daughter-in-law CDR Shellee Ann Morris, USN both of Virginia Beach, Virginia.  He also leaves behind two grandsons – John Patrick Leskovich of Pittsburgh, PA and Thomas Matthew Leskovich of Lewis Center, OH, a granddaughter SPC Sarah Frances Leskovich, USA an airborne combat medic with the 82nd Airborne Division in Fort Bragg, NC, and a step-granddaughter Shelby Amanda Mackey of Minneapolis, MN.  He was preceded in death by his brother, Doug.

Services will be held at the Saint Andrews Chapel at the United States Naval Academy at 10 AM on March 6th, 2020.   In lieu of flowers, the family requests that donations be made to the Navy-Marine Corps Relief Society.  Condolences for the family may be sent to Judy Shackelton, 5633 Travis Pointe Court, Westerville, OH 43082

To order memorial trees or send flowers to the family in memory of Norman Shackelton Jr., please visit our flower store.