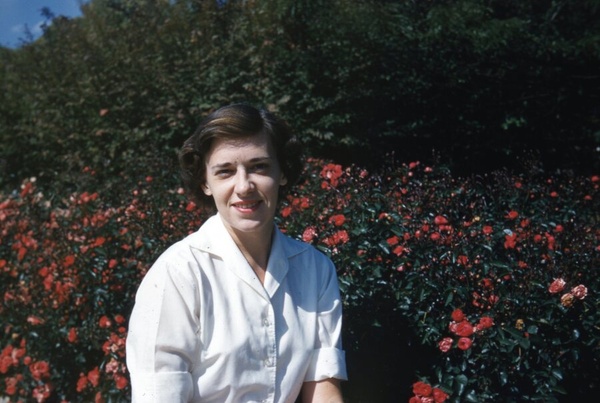 Pauline "Polly" (Pierce) Dyer, 93, of Columbus, OH, passed away on Sunday, January 9, 2022, under hospice care at The Sanctuary at Tuttle Crossing, Dublin, OH, where she had lived briefly. Polly was born in Detroit, MI, on July 3, 1928, to Robert Pierce and Virginia (Lawrence) Pierce. She grew up in Ashland, Ohio, during the Great Depression and World War II, in a household of five women (sister, mother, grandmother, and great-aunt), where she learned the values of hard work, thriftiness, and using and re-using what you have.

Polly graduated from Ashland High School in 1946, and then moved to Dayton, OH, where a young man named Grant Dyer noticed her working in the day care across the street, and, after taking a closer look through a pair of binoculars, he decided he wanted to meet her. A few years later, in 1952, they were married in Ashland. Having begun their family, and after a few years of job-related moves around the Midwest, they settled in Columbus for good in 1958.

Now living in a household with four males (husband and three sons), Polly strived to be the best mom possible (and more) to her sons. She was an expert cook, planner, and, most importantly, was a loving and caring mom to her sons as they grew up, which included knowing where to draw the line. She had a good sense of humor, which she carried with her to the end, and while she faced numerous challenges throughout her life, she also enjoyed many worthy rewards. She instilled in her sons a great love of nature and animals, which they have carried throughout their lives. She was later employed as an administrative aide at Harding Hospital in Worthington, OH, for a number of years, and was a very active volunteer at the Columbus Park of Roses, where she met many cherished friends. Gardening at home was another favorite pastime of hers.

As a senior, Polly enjoyed many trips to Europe, traveling as far as Moscow, but her special favorites were Ireland, Scotland, and England. She always looked back fondly on these excursions.

Polly had a special place in her heart for cats, and adopted eight of them over a period of sixty years.

Predeceased by sister Phyllis Morrissette, husband Grant, and oldest son Mark. Survived by sons David (Dorene) and Paul. Paul was her at-home caregiver during her final years. Also survived by grandsons Collin and Alexander. There will be a memorial service soon, at an undecided date. Donations can be made in her memory to the Cat Welfare Association, Columbus.

To plant a beautiful memorial tree in memory of Pauline "Polly" A (Pierce) Dyer, please visit our Tree Store.

To order memorial trees or send flowers to the family in memory of Pauline "Polly" Dyer, please visit our flower store.