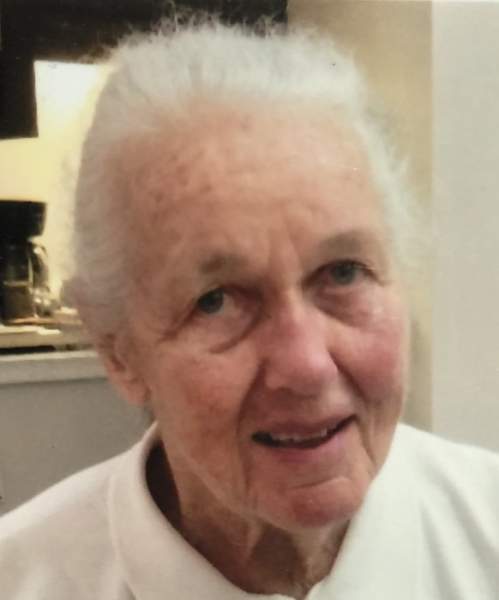 Phyllis Elaine Gillan, affectionately known as “Philly”, to her loving husband “Bud”, passed away peacefully in her sleep Sat April 24th, 2021 in Westerville, Ohio at the age of 90.
Phillis was the only child born to Perley and Mable Johnston on Dec 9th, 1930 in Quincy, Massachusetts.  She attended Quincy High School and later attended college for two years.

Phyllis later met Bud (Francis J. Gillan) and the two were married in Boston on Dec 26th, 1953.  Later, they moved to Rhode Island, Detroit, and then to Maumee, Ohio where they raised the family of 3 boys Stephen, Mark, Paul. Christopher the 4th son, sadly passed away at birth.

Phyllis was a loving wife and stay at home mother to her boys.  After the children were raised, she worked fulltime several years at Foodtown grocery store from which she retired.

Phyllis was a baker, seamstress, cook, and homemaker.  She was an avid reader and loved to knit sweaters, hats, gloves and even baby blankets and sweaters for her grandchildren.  Phyllis made the best crunchies and loved to play their favorite family game of “Oh Shit” where she would ruthlessly pursue you around the board until she could knock you out.

Phyllis’ favorite sports teams were the Detroit Lions, Tigers, Redwings, and Pistons.  She loved to spend many peaceful hours in the backyard reading and listening to games on the radio.

When Phyllis and Bud moved to Columbus in the fall of 2015, she became one of the favorites at their assisted living facility, The Village of Westerville. She was lovingly referred to by the staff as “Philly Fudge”.  She kept things upbeat by patting the nurses on the behind and pointing out things that needed attending to.  When asked what her name was she once said “Puddin Tame, and if you ask me again, I will tell you the same.” and had all the staff laughing.

Phyllis was loving devoted to her boys and their families, and husband “Bud” of 65 years until his death Aug 4th, 2018.

Phyllis is survived by sons Stephen (Joann) Gillan, Paul (Maria) Gillan and preceded in death by son Mark in 2008.  Grandchildren include Brittany, Colin, Jeremy, McGuire, Luke, Alyssa, Olivia, and Nick.  Great grandchildren include Zachary, Harper, Jaxon, Liv and JT and another little girl on the way.


We would like to thank the staff at The Village of Westerville and Hospice for their dedication and love for Phyllis.  Funeral Mass is set for Monday May 10th at St Matthias Parish, 1582 Ferris Rd, Columbus, OH 43224 at 6:30pm.  In the coming months, both Phyllis and her husband will be laid to rest in Arlington Cemetery.

To order memorial trees or send flowers to the family in memory of Phyllis Gillan, please visit our flower store.