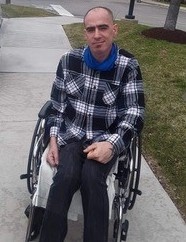 On Saturday September 4th, 2021, Rocky Allen Tippie passed away of stage 4 glioblastoma brain cancer at age 44. He fought for almost 5 years which surprised most. He died peacefully and in comfort care at Kobacker House hospice facility with his family close by.

Rocky was born on July 8, 1977. He had a love for life and a zeal for fun. He was a dedicated and hard worker. He was a member of the local 172 Iron Workers Union and retired early due to his cancer. He was very proud of the many structures he helped to build in Columbus and the surrounding cities. Including a wing at the James Cancer Center.

Rocky was survived by his wife Amanda Bush, her children Stormy Bush and Brandon Thacker, his daughters Summer Griffith and Rylie Ewing, his mother Rebecca Tippie, his father Robert Tippie,  and his sisters Laura Chapman and Tricia Shanks. He also has many other beloved family members including aunts, uncles, nieces, nephews, cousins and close friends that were like family to him. He loved his family and was also so loved by them all.

What Rocky would have liked you to know is…Yes he lived a wild life that was crazy at times. We all know he liked to have fun. He also wrestled with God and making things right for years. However, towards the end of his life he longed even more for peace as he feared death. He knew he was running out of time and needed to make things right with God. The last four months of his life he fought to do just that. He moved back to his family, studied  the bible and was baptized. He was clean, sober and clear minded for the first time in years. He read or listened to the bible every day, he liked to have family devotionals, went to church regularly,  gave financially and longed to reconcile with his daughters. He died at peace, knowing he was forgiven and knowing where he was going. He really wanted to impact the lives of others and show them God. We believe he did and will continue to do so because his life was a testimony and his story was truly a miracle!

To order memorial trees or send flowers to the family in memory of Rocky Tippie, please visit our flower store.