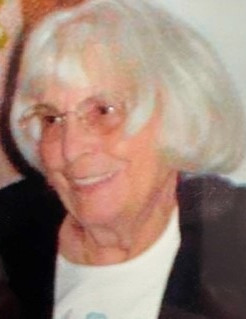 Stella T. (Abbott) Appell, age 93, of Columbus, Ohio passed away peacefully on May 7, 2022, at home. She was born September 22, 1928, in Olean New York, to the late Rosario and Carmella (Fleri) Abate., She was a member of St. Matthias Catholic Church, and an original member of the St. Frances DeSales cafeteria staff.  She enjoyed nothing more than spoiling her grandchildren and cheering for her boys and grandchildren in whatever sport they were playing. One of her many claims to fame was her lasagna, which she baked more than twice for several local fire stations when her husband was on duty. Yes! a pumper truck or squad would roll up to our house to pick up their portion.  In addition to her parents, she was preceded in death by her husband of 67 years, Robert N Appell and son Robert N. Appell II, her second mom, better known as her sister Rose (Phil) Massie. Along with eleven other siblings.   Stella is survived by her sons, James (Mary) and T.J. Appell; daughter-in-law, Terry Appell; grandchildren, Amy (Fred) Green, Dr. James "Duke" (Carrie) Appell, Robert Appell III(Shawnee) and Ryan Appell (Lacey); 5 great-grandchildren, Andrew, Justin and David Green, Victor and Colin Appell, sister Lucy Cole; and is also survived by many other dear nieces, nephews, extended family and friends. A large thanks to her daily caller Bobby D'Andrea; and her bi-monthly lunch partner Karen (Bob) Utecht. We also would like to recognize the staff at the Ohio Health Bing Center who cared for mom for several years, especially Nurse Amy. Columbus Oncology and Hematology Associates and the staff who performed bi-weekly bold draws and infusion, especially Nurse Ann.

The Mount Carmel Palliative and Hospice Care Group that got us so beautifully to the end-You all will be in our hearts for a long time.

We lay Mom to rest along with dad in a private interment later this month.

In lieu of flowers, donations may be made to:

To order memorial trees or send flowers to the family in memory of Stella Appell, please visit our flower store.