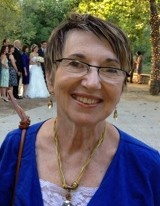 Theresa was a unique, gregarious lady with a flair for living. She greatly valued humor, beauty, love, commitment and effort. Theresa was a loving sister, and often a caregiver to her three younger siblings in their early lives. She grew up near Euclid Beach and Collinwood High School in Cleveland, and earned a Bachelor of Arts in Theater from University of Akron.

Theresa was in 8th grade at Collinwood when she saw a handsome 10th grader performing as the lead in “My Fair Lady.” A future drama student herself, she nudged her friend and said “See that guy up there? I’m going to marry him someday.” Two years later she ran into that guy, Walter Frazier, at the bus stop and asked him out on their first date to a Rainbow Girls ceremony where she became Worthy Advisor. The rest was history: Walter and Theresa were married on July 31st 1965. Early in their 56-year marriage they lived in Panama, California, Massachusetts and Ohio.

After working on children’s theater productions and helping to establish a theater workers’ union in Akron, Theresa devoted her boundless energy to raising three daughters and running her household. Her family later moved to Buffalo, NY, and she stayed involved in her craft as a member of the wardrobe union and as a youth theater director. She began working full time when her kids grew more independent. Theresa continued teaching theater, directed and acted in shows at Lancaster Opera House, wrote ads and did voice work at WKSE-FM, and eventually ran her own marketing firm with dear friend Suzanne Badgley. As empty nesters, Theresa and Walt opened a bed and breakfast, The Three Sisters, in Millersburg, OH, where Theresa worked as a substitute teacher. They then moved back to Akron, where Theresa served as an interpreter at Stan Hywet historic house, a position that put her theatrical and people skills in the spotlight. Whatever the work was, she pulled her whole self into it.

Theresa was enthusiastically involved in her community. She was a Girl Scout leader and president of the elementary school PTO. She volunteered at Brothers of Mercy nursing home and raised money for the American Cancer Society. She was part of the Harris Hill Mothers Club, a vibrant social community for neighborhood moms. She always supported and connected with her friends and family, through many means including baking amazing pies, hosting Thanksgiving dinners, and sharing her wry brand of wisdom.

To order memorial trees or send flowers to the family in memory of Theresa Frazier, please visit our flower store.