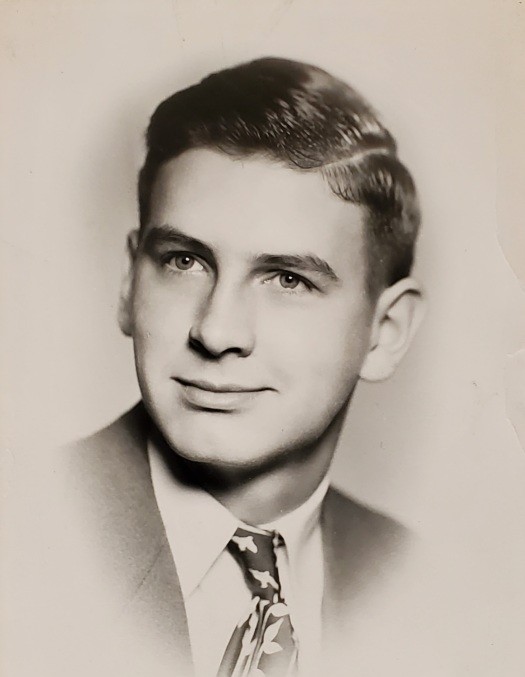 William Carl “Bill” Robinson passed away gently in his sleep on February 22, 2021 in Delaware, Ohio, after rallying against COVID-19 for the past two weeks.  Bill was born on November 12, 1931, in Virginia, Minnesota to Alice (Bjorklund) and Robert Lincoln Robinson. He was preceded in death by his parents and his brother, Attorney Robert Kenneth Robinson.  Bill was a part of a large extended and wonderful family of Robinsons, Falconers, and Hendershots who homesteaded land in the Northern Wisconsin woods.  Bill graduated from East Superior High School in 1949 where he was voted “Most Dignified”  in his class.  Bill graduated from the University of Wisconsin, Superior in 1953 with a BS in Chemistry, and was later certified by Northwestern University in Electrical Engineering. Bill served as a First Lieutenant in the United States Air Force in the Korean War. He was stationed in Japan as an Intercept Controller and really enjoyed learning Japanese and the Japanese culture.  After his service Bill moved to Columbus, Ohio to work for the Western Electric Company, where he had been interviewed by Nancy Lee Norris – whom he married in October 1959.  Bill had a 30+ year career with Western Electric (later Bell Labs and AT & T), starting with his first patent award in 1962.  Bill and Nancy selected a lot with large oak trees on Willowwood Road and built one of the first homes in the Forest Park West subdivision, where they raised Holly (Fischer), Jolie (Begley), and Mitzi (Moshiri).  Bill was the most amazing, loving, gentle and kind man. He was exceptionally witty and brilliant. Bill “B2” Robinson was ingenious at just about any constructing or gadget related project, and was an avid chess player.  Over the summers in Wisconsin, Bill single-handedly built a cabin on Middle Eau Claire lake, near the family homestead at Rocky Lake.  Bill’s children and grandchildren spent many summers at Eau Claire fishing, boating, skiing, picking blueberries, spotting bears and wolves, playing “That’s All” and Scrabble, and of course attending the Barnes Community Fireworks.  Bill was in excellent health and despite suffering from Alzheimer’s for many years, was amazingly cheerful, funny and aware of current events. He was a fabulous father, grandpa and husband.  Our family thanks the caring staff at Willow Brook Christian Communities for providing a nice home for Bill over the past few months.   Bill Robinson, we will miss you so much but know that you would not want us to be sad.  Bill is survived by his loving wife Nancy, his daughters and sons-in-law Robb Begley, Ken Fischer, and Ahmad Moshiri, and his beloved grandchildren Emily, Grace, Carl and Sam Fischer, and Patrick and Jack Begley.  A private memorial is planned with family members. “Every blade in the field * Every leaf in the forest *Lays down its life in its season * As beautifully as it was taken up.” ~ Henry David Thoreau.

To order memorial trees or send flowers to the family in memory of William Robinson, please visit our flower store.